The Renewed Upswing In The S&P 500

PAL mulls Chapter 11 filing in US

The S&P 500 recovered from yesterday’s premarket slump and tried reaching for Monday’s highs again before losing altitude. Have we seen a daily reversal, and if so, how serious is this?

Given for example the weak showing in high-yield corporate bonds yesterday, I think that it’s now the bears who have the opportunity to show us what they’re made of. The price action before the closing bell certainly validated my earlier decision to take the nice long profits off the table.

So, stocks have declined below the mid-June tops, yet are kissing that line again in today’s premarket trading. A little breather following the string of five consecutive days of solid gains wasn’t really unimaginable, but isn’t close to over now?

Birthing troubles or not, I still think the unfolding rally has legs enough to confirm this breakout shortly.

Such were my reasons why yesterday:

“(…) I say so despite the uptrend in new US COVID-19 cases that has many states stepping back from the reopening, rekindling lockdown speculations. I say so despite the Fed having its foot off the pedal in recent weeks, which makes for more players looking at the exit door as the rising put/call ratio shows.”

The summer months will be one heck of a bumpy ride, and the bullish picture is far from complete as the lagging Russell 2000 shows. But emerging markets are on fire, not too far from their February’s lower high already – Monday’s boon in the China recovery story keeps doing wonders. That’s wildly positive for world stock markets, including the US ones.

V-shaped recovery being real or not, corona vaccine hype or not, stocks love little things more than the central banks standing ready to act. And the punch bowl isn’t about to be removed any time soon. Let’s take the most recent Fed policy step, which was the decision to start buying individual corporate bonds. So far, less than half a billion dollars has been deployed to this purpose – but the corporate bond market is firmly holding up nonetheless, with the Fed waiting in the wings.”

With the exception of emerging markets consolidating gains yesterday, the above points remain valid also today – and likely throughout this data-light week too.

But let’s check upon yesterday’s market performance so as to form a momentary, spot-on picture. 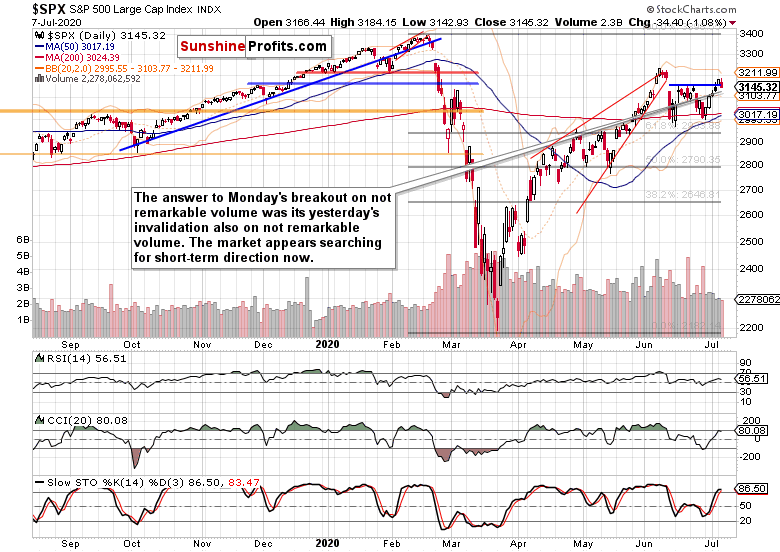 Monday’s breakout has given way to yesterday’s close back below the horizontal line connecting mid-June tops, but the conviction behind the move lower isn’t there at this moment. That’s what the low daily volume says.

Both the CCI and Stochastics keep supporting the upside move – it’s only the RSI that feels tired. This doesn’t concern me that much – it’s not flashing a bearish divergence, it isn’t languishing at an extreme reading. In short, it doesn’t preclude the rally from going on once the current breather is over.

And until I see credible signs that the markets are getting spooked by corona, botched policy responses or anything else, there is little point in acting as if the sky is falling. It isn’t the case – to be clear, the time to turn really bearish would come, but we’re not there yet.

Whenever markets start acting jittery, it pays to remember the big picture:

“(…) Recapping the obvious, stocks are on the upswing after the bears just couldn’t break below the 200-day moving average, which means that the momentum is with the bulls now. The daily indicators keep supporting the unfolding upswing, and volume doesn’t raise red flags either.”

The Credit Markets’ Point Of View 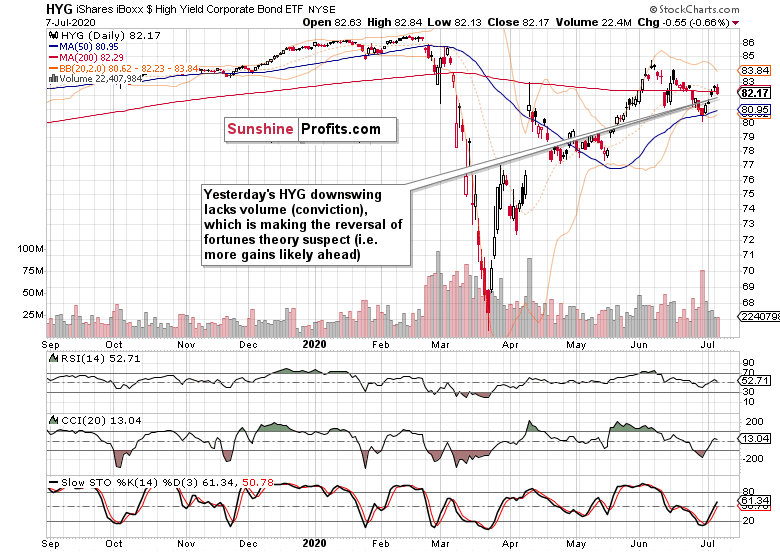 High yield corporate bonds (HYG) have broken the string of quite a few daily gains in a row, and closed not too far from their Friday’s finish. For a meaningful reversal though, I would like to see much higher volume – it’s evident that yesterday’s desire to sell doesn’t compare to the late June buying spree.

This goes to highlight that Tuesday’s setback likely has a limited shelf life.

The action in investment grade corporate bonds is thereby telling me that the credit markets’ setback yesterday isn’t turning into a full blown concern. 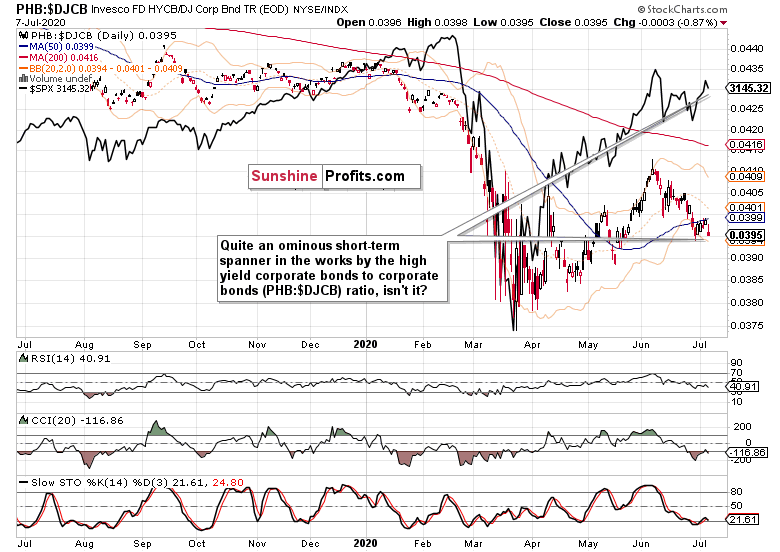 On the surface, this is a concerning chart. It’s true that the ratio of high yield corporate bonds to all corporate bonds (PHB):$DJCB) has seen better days. Will the breakdown attempt below the rising support line connecting its March, April and May intraday bottoms succeed? And if so, will it drag the S&P 500 lower?

Since mid-April, stocks have refused to follow the ratio much lower, and that’s an understatement. Stocks are not diving or starting to dive as they did back in February while the ratio was already trending lower. Looking at the real world situation back then and currently, we’re better prepared to deal with the challenges now, once the lockdown costs in terms of economic activity and human toll have become apparent. There is less appetite for that, thankfully.

Therefore, I think that once we see policy misstep risks removed (it’s not just about the Fed returning among the buyers. Trump’s Mount Rushmore speech helps recall the values and inspiring successes of prior generations, so I naturally wonder about the upcoming stimulus plans), the ratio will turn higher again so as to support the stock upswing that got a little ahead of itself recently when viewed by this metric alone.

Smallcaps, Tech And Other Clues In Focus

The Russell 2000 (IWM) keeps underperforming, and turned lower yesterday to a greater degree than the S&P 500 did. That doesn’t bode well for the short-term.

Technology (XLK) also turned down yesterday, yet the downswing’s volume was lower than that of the preceding upswing. Coupled with the semiconductors not having retreated to such a degree, that’s a short-term bullish sign, and it does outweigh the Russell 2000 non-confirmation.

Volatility VIX rose slightly yesterday, but the dollar having again stalled is supportive for stocks.

Such were my thoughts about the short-term flies in the bullish ointment:

“(…) Nothing unsurmountable, and definitely not overshadowing improving market breadth in the S&P 500 or the still very low bullish sentiment that can power stocks higher – you know what they say about the times when everyone moves to the same side of the boat…”

Summing up, yesterday’s decline in the S&P 500 appears merely of short-term nature, as the credit markets show there is no real willingness to sell. Investment grade corporate bonds are trending higher, and the one-day decline in high yield corporate bonds has only so much power to rock the bullish boat. I look for the breakout above short-term resistance formed by the mid-June tops to succeed shortly, and the rally’s internals including emerging markets, semiconductors and the dollar keep supporting more gains to come.

Previous Video Games > You Can Still Machine Gun Everyone But the Hand Sign “OK” is Now Off Limits…Are They Kidding?!?!
Next Chart Of The Day: NASDAQ Braces For Correction After Record High

PORT OF SPAIN, Trinidad, May 15 (Reuters) – Trinidad and Tobago will impose a state …