Lopez steps down from ABS-CBN, other firms

As the mainstream business media like CNBC and Bloomberg keep pointing out, the similarities to today’s S&P 500 and the late 1990s are unmistakable: the incredible out-performance of Tech as the top S&P 500 weight, the vortex it has created just like the late 1990s, where everything else, such as mid-cap, and small-cap value are being left in the dust (in terms of relative returns and you canlook at this post to verify), while the Top 5 S&P 500 names continue to generate incredible alpha versus the rest of the market, the ignoring of significant economic events like COVID-19 (I’m thinking of the Long-Term Capital Management Crisis of 1998 again) where the stock and bond markets get hammered, but Tech is the last to head down, and the first to recover.

So how can readers benefit from the current market, and yet plan for the day the inevitable rotation occurs where large-cap Tech runs out of gas and the Top 5 names in the S&P 500 suddenly become 50 – 54 in the index and lose half their market value?

The ’90’s too weren’t just Tech, although the talking heads refer to it as the “dot.com” craze. Walmart (NYSE:WMT), Home Depot (NYSE:HD), JPMorgan (NYSE:JPM), Citi (NYSE:C), the brokerage stocks like Goldman, Lehman, Morgan, were just shooting the lights out every year. The brokers were nuts, the Street EPS consensus for a Morgan Stanley (NYSE:MS) or Lehman earnings report would be $2.75 a share, and the banking giants would print $5.00 with a 15% revenue upside surprise. (Goldman didn’t come public until May, 1999, so it was a private entity during most of the craziness.)

It was an absolutely crazy market in the late 1990s.

So enough of history – let’s talk about today.

Small-caps, according to our Style-box strategy linked above, haven’t beaten large-caps since 2016.

Unlike the late 1990s though, this is a much narrower market than 1999. Financial giants haven’t participated at all since – well – for 10 years. Retail for understandable reasons is completely absent, and so is Energy and commodities, also understandable. Counting Alphabet’s 2 share classes as one, and depending on how you classify Visa (NYSE:V), the Top 10 S&P 500 names are 5 – 6 tech stocks, 2 financial giants (JPM and BRKA), one health care giant in JNJ and one consumer staples giant in Procter & Gamble (NYSE:PG). which has had a remarkable turnaround.

How to adjust portfolios for concentration risk:

1.) Look to “uncorrelated” sectors which – for this blog – would be staying with the Financial overweight. Financial’s including the big banks report next week, and the results will be carefully looked at in terms of credit losses, credit reserves and net interest margin. However, CCAR has already taken share repurchases and dividend increases off the table for the 3rd quarter. so at some point, the sector will start reflecting the “return-of-capital” benefit. More on Financials next week. The Industrial sector is also beaten down, and earnings are depressed, with Tranports (airlines) being a part of the sector.

2.) Look to “Value” Tech if you are nervous with momentum Tech like Amazon (NASDAQ:AMZN). We currently put 4 of the growth giants from the 1990s into the Value Tech category and those stocks are Oracle (NYSE:ORCL), IBM (NYSE:IBM), Cisco (NASDAQ:CSCO), and Intel (NASDAQ:INTC).

In mid-June here, we wrote about momentum Tech and the Top 5 names in the S&P 500 here, and how their cash-flow valuations looked much better than their PE ratio’s.

Expanding that spreadsheet, we compared current “value” Tech to momentum Tech in terms of valuation for readers: 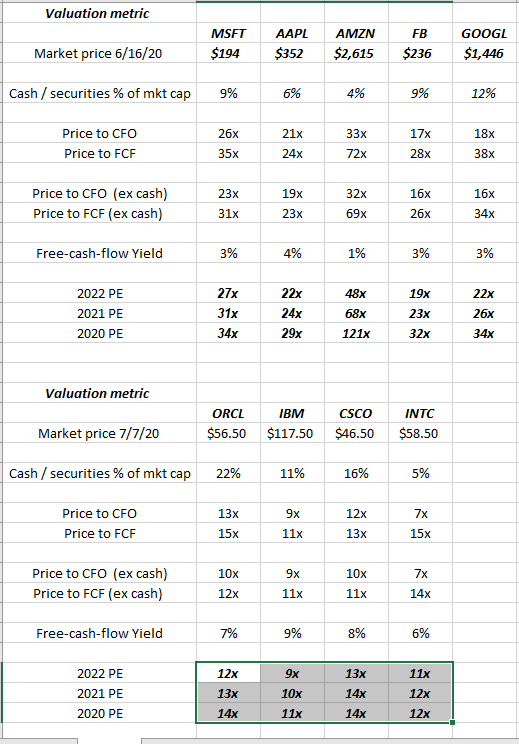 The market prices for “value” Tech reflect the close of business, July 7, 2020, while the original June 14 post for momentum Tech wasn’t updated.

The point is, is that if you are worried about current Tech, the old Tech giants offer good value, but very little revenue growth. Not one of the 4 stocks mentioned in the table has “expected” revenue growth fast than low-to-mid single digits the next 3 years.

Just so readers are aware, these stocks have lagged badly for 5 years, even longer. The highest potential for a turnaround is IBM in my opinion, with new management, and a new emphasis on hybrid cloud. I like Oracle and Cisco but they require the patience of Job. Intel has an Achilles heel we’ve written about before in that capex has risen from a $10 billion run rate to an $18 billion run rate and capex consumes 50% of cash-flow.

3.) Equal-weight ETF’s like QQQE, RSP (S&P 5oo equal-weight), and others remove the market-cap distortion from portfolios and can allow readers to avoid heavier concentrations in some ETF’s like the QQQ, where the top 3 names are 33% of the market cap, or the old days of the XLE or Energy ETF (NYSE:XLE), when both Exxon-Mobil and Chevron (NYSE:CVX) were 45% of the XLE.

4.) Employ “value” funds like Bill Nygren’s Oakmark Fund. Bill was vilified in the late 1990’s for his absence of tech and momentum names and his fund’s performance reflected it, but the Oakmark Fund took off in the early 2000s as the large-cap growth and “tech momentum” trade faded.

One final point: Apple (NASDAQ:AAPL) is a value stock in many screens and the momentum has been just phenomenal. In calendar 2019 Apple grew EPS and revenue 19% and 9% respectively while the stock returned 81% in calendar 2019. That’s a stock that is seeing “PE expansion”.

Per Bespoke’s Morning Lineup from July 7th, 2020, market breadth looks pretty good. I recall that in the late 1990’s SP 500 breadth started to break down in late 2007, when the Thai Bhat and the Malay Rinnghit devaluation issue started and then culminated in the LongTerm Capital Management Crisis.

Per Bespoke, there are no signs of any breadth deterioration occurring today.

The other aspect to today that is very much unlike the late 1990’s and early 2000’s is that bullish sentiment – per the AAII data – is at a 9-month low. Read again, Ed Yardeni’s earnings to market-cap relationship within Tech, and you have many good reasons the mega-cap Technology out-performance can continue.

Breadth and sentiment are very different today – far more supportive – than in the late 1990s.

However, as this blog is doing, at least prepare for the day when the mega-cap Tech loses favor and what your portfolio options might be to limit the damage to client portfolios.

Just the fact so many are looking for another “March, 2000” analog, might be the clue that it won’t happen immediately. The continued improvement in the credit markets tells me that this market is a “Fed liquidity” story and it could continue to benefit the stock market for some time.

After the Fed liquidity programs, the 2020 Presidential election is the next key event that could drive a leadership change.

Q2 ’20 earnings start next week, and the reactions to good numbers will be the real tell.

Take everything in this post with substantial skepticism, it is one opinion in a sea of both informed and uninformed opinions. Do your own homework and make sure you consider your own risk tolerance and financial profile before investing on your own.