The world markets are moving upwards. Japanese Nikkei 225 reached a 10-week high, adding 1.5% this morning after growing 2% a day earlier. Against this background, the American S&P 500 is passing an essential double test. Futures on the S&P500 (SPX) exceeded 3000 this morning. In 2019, the index managed to take this round mark not from the first attempt, making it a critical resistance.

The importance of this level is now further enhanced by the fact that the 200-day average passes near it. This level is a significant trend indicator for large investment banks. Unofficially, this level separates the downtrend from the uptrend. Many traders refrain from buying the asset that trades below the 200-DMA, and moves above this line serves as buying signal. 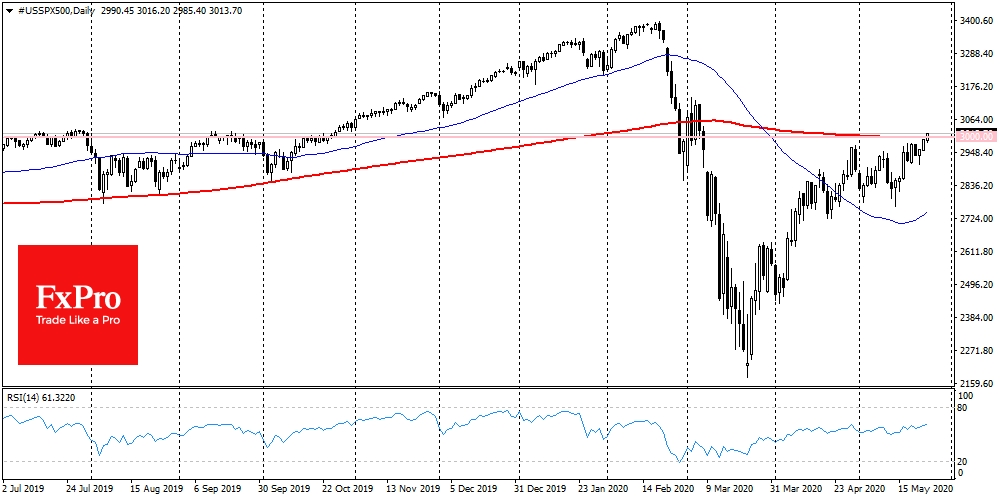 Thus, the closing of the trading session today above 3000 for S&P500 may serve as a strong signal for a further rally of the American market and spur growth in the world markets. Strengthening above this mark in October 2019 the index added 13% in the following four months.

However, despite the importance of this moment for the psychology of market participants, one should be very careful with further purchases. Against the background of the deplorable state of the labour market and consumer spending and the multitude of bankruptcies of American companies, the question of who is the ultimate buyer is essential.

Earlier, we have already noted a direct correlation between the news about the Fed’s purchases on the balance sheet and the dynamics of the American market. A decrease in these purchases in early May coincided with the index slippage. Two weeks ago the Fed bought $213bn worth of securities, while the S&P500 index closed with a 3.5% increase. Last week’s purchases on the balance sheet of the U.S. central bank amounted to $103bn, which returned buyers to the stock markets (although the Fed buys bonds). 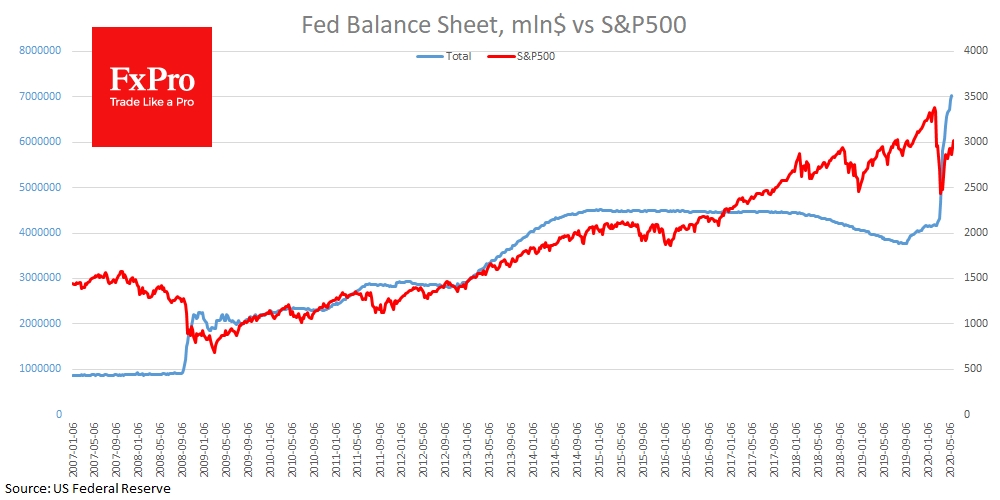 However, these markets are interconnected: a dominant buyer in bonds reduces their yield, as well as injects healthy liquidity into money markets. Then it goes on to buy risk assets.

However, there are questions to what extent such growth of markets is stable. Companies are also in a hurry to take advantage of this situation. Some announce an additional issue of shares, which dilutes the shares of shareholders and lowers quotations. Others issue bonds to finance the share buyback, which raises the share price, but hardly contributes to the revenue growth of companies.

At the same time, one should not forget that the government is now the most significant debt issuer. Investors and the Fed will give preference to government bonds, which worsens the stock market prospects in the coming quarters. Fundamentally, growth of stocks can be sustainable only after the governments of the U.S. and other major countries move from the phase of debt accumulation to its reduction through inflation, restructuring or default.

Previous Trump Derangement Syndrome in FULL Effect – “I would vote for Joe Biden if he boiled babies and ate them”
Next FTSE 100 Daily Forecast – May 26, 2020