When Will The Markets Return To Growth? Here Is The Answer

A new market meltdown marked Monday. U.S. Dow Jones collapsed by 12.9%, surpassing last Thursday’s decline (-9.9%). It was the third biggest one-day decline in the index after 1987’s Black Monday (-20.5%) and October 1929 crash (-13%). The Volatility Index, VIX, closed at its highest level in history, clearly reflecting the extreme fears in the markets, even at the end of trading in the United States.

On Tuesday morning, the indices rebounded, with futures on the S&P 500 adding almost 5% since the beginning of the day, touching the upper bound of the trading range. FTSE100 futures have returned to the levels of the beginning of the week. This reverse gives hope that positive sentiment will prevail in the markets today 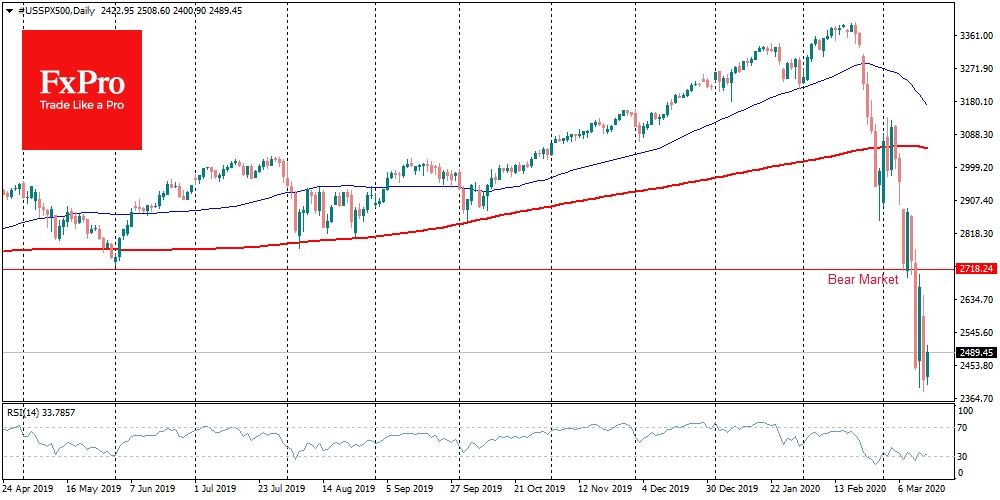 SPX meltdown on Monday was 3rd biggest in history

Many observers note that the current market rebound may be as deceptive as last Friday’s upswing, as the coronavirus continues to spread rapidly, and we see an ever-growing new daily cases numbers.

In our view, market sentiments are pegged to the daily number of new infected. When China and Korea managed to seriously slow down the spread of the virus, markets returned to growth. In the first half of February, Asian indices were falling more in the countries with the biggest number of detected cases. Later, on February 21, European and American indices began to decline. And the turbulence is increasing in line with the growing number of new cases there.

If our observations are correct, the stock markets may gain ground for growth when the number of new cases start to decrease day after day. Yesterday we saw such a decline, although it is more of a formality. Worldometer showed 12,896 new cases on March 16, compared to 12,924 a day earlier.

Besides this, on Monday, the markets continued massive liquidation of all positions, including traditional safe-havens. Ten-year Italian government bonds showed a yield increase from 1.2% to 2.2% in just a few days.

And this can easily be explained by the expectation that the measures taken by the government will destabilize the Italian budget, increasing the debt burden on the government.

And it is still undefined how the government of Italy or other countries will subsequently deal with the extremely high debt burden. Besides short-term market turbulence, investors are beginning to fear that the longer the recession lasts, the higher the chances of default. A milder scenario suggests high inflation, allowing debt inflation. This means that bond prices may continue to decline on fears of a similar depreciation in the debt of large economies and companies.

Previous The Markets May Be Taking A Beating BUT, Camgirls are Cashing In!
Next Senate Democratic leader urges passage of coronavirus relief bill