Trump to vote in Florida before hitting campaign trail, Biden heads to Pennsylvania

(C) Reuters. FILE PHOTO: People participate in a festive parade held by the Recall Dunleavy campaign seeking to oust Republican Gov. Mike Dunleavy and to deliver about 49,000 petition signatures in the first of two rounds required to get the measure on the ballot in An

ANCHORAGE, Alaska (Reuters) – The Alaska Supreme Court on Friday cleared the way for a campaign seeking to oust the state’s embattled governor to proceed with plans to collect enough signatures to place a recall initiative on the 2020 ballot.

In the latest legal setback for Governor Mike Dunleavy, a first-term Republican and ally of U.S. President Donald Trump, the state’s high court lifted a stay blocking state election officials from printing and distributing petition booklets for the recall drive.

After a lower-court judge ruled that allegations of misconduct lodged against Dunleavy met the legal requirements for placing a recall question on this year’s election ballot, an injunction was imposed pending the Supreme Court’s review of the case.

Friday’s decision allows the signature-gathering process to move forward while the high court considers the governor’s appeal of the recall ruling on its merits.

During his first 13 months in office, Dunleavy has antagonized large swaths of Alaska’s electorate in both major political parties.

His most controversial actions have included a bid to slash state university funding by more than 40%, a drastic cutback of state ferry operations that left coastal communities stranded over the winter, endorsement of an unpopular copper-mine plan, and the awarding of a no-bid $441,000 contract to a major campaign contributor’s grandson.

The reasons cited for his ouster in the recall petition are narrower, however.

It accuses Dunleavy of illegally using state funds for partisan politicking, violating legal requirements for filling a judicial vacancy and violating the constitutional separation of powers with a budget veto intended to punish the courts for an abortion-rights ruling.

The state’s constitution allows for recalling a governor on grounds of incompetence, negligence or corruption.

The campaign to remove Dunleavy has so far collected more than 49,000 signatures of registered voters, nearly double the number necessary for the first phase of a recall. Qualifying for the ballot requires 71,252 more signatures, equivalent to 25% of the total votes cast in the last state election.

Further delays in the process while the legal challenge remains under court review would be unfair to the recall campaign, the Supreme Court ruled, finding that Dunleavy’s supporters have failed to demonstrate a likelihood of prevailing in their case.

“This is a serious recall. We’re very grateful that the Supreme Court is treating it as such,” Pywell said.

Alaska’s assistant attorney general, Maria Bahr, said in an email that the Alaska Division of Elections will comply with the high court’s ruling.

Elections Director Gail Fenumiai said petition booklets are expected to be ready by next Friday. 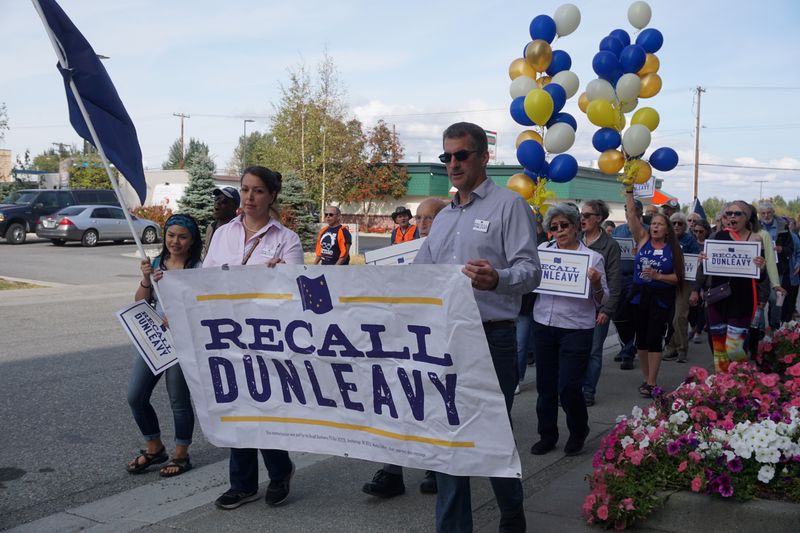